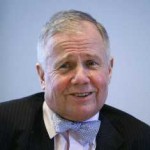 James Beeland “Jim” Rogers Jr. was born in Baltimore, Maryland, USA. He is an American businessman, investor, economist, traveler and author. He is the Chairman of Rogers Holdings and Beeland Interests, Inc. He was the co-founder of the Quantum Fund and creator of the Rogers International Commodities Index. He earned a BA degree in History from Yale University in 1964. He earned a second BA degree in Philosophy, Politics, and Economics from the University of Oxford in 1966. In 1970, he joined investment bank Arnhold and S. Bleichroder, where he worked with George Soros. From 1990 to 1992, he traveled through China again, as well as around the world, on motorcycle, over 100,000 miles across six continents, which was picked up in the Guinness Book of World Records. Between January 1, 1999, and January 5, 2002, Rogers did another Guinness World Record journey through 116 countries, covering 245,000 kilometers with his wife, Paige Parker, in a custom-made Mercedes. He has written several books include: Investment Biker: Around the World with Jim Rogers, Adventure Capitalist, Hot Commodities, A Bull in China, A Gift to My Children, Street Smarts, and Social Work with Adults (with Lucy Bright and Helen Davies).