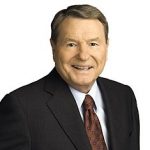 James Charles Lehrer was born in Wichita, Kansas, USA. He is an American journalist, news anchor and novelist. He earned his Bachelor of Journalism degree from the Missouri School of Journalism at the University of Missouri in 1956. He is the former Executive Editor and a former News Anchor for the PBS NewsHour on PBS. He is known for his role as a Debate Moderator in U.S. Presidential Election campaigns. In 1959, he began his career in journalism at The Dallas Morning News in Texas. Later, he worked as a Reporter for the Dallas Times-Herald, where he covered the assassination of John F. Kennedy in 1963. He has written several novels include: Viva Max!, Kick the Can, Crown Oklahoma, The Sooner Spy, Lost and Found, Blue Hearts, The Last Debate, Purple Dots, The Special Prisoner, Flying Crows, The Franklin Affair, and Oh, Johnny! He has received several awards, including Paul White Award (1990), George Foster Peabody Award, Emmy Award, National Humanities Medal (1999), and Walter Cronkite Award for Excellence in Journalism (2008). He married to Kate Lehrer, a novelist in 1960. They have three daughters.