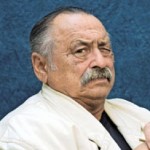 Jim Harrison was born in Grayling, Michigan, USA. He was an American novelist and poet. He earned a BA degree in Comparative Literature in 1960 and an MA degree in Comparative Literature in 1964 both from Michigan State University. After a short stint as assistant professor of English at Stony Brook University from 1965–66, he started working full-time as a writer. He wrote several novels include: Wolf: A False Memoir, A good day to die, Farmer, Legends of the fall, Warlock, Dalva, The Road Home, True North, Returning to Earth, The English Major, The Great Leader, and The Big Seven. He wrote several poetry include: Plain Song, Walking, Locations, Outlyer and Ghazals, Letters to Yesenin, The Theory and Practice of Rivers, After Ikkyu and Other Poems, The Shape of the Journey, Livingston Suite, and Saving Daylight. His nonfiction works shown below: Just Before Dark, The Raw and the Cooked, Off to the Side: A Memoir, and A Really Big Lunch. He wrote several films include: Wolf, and Revenge.