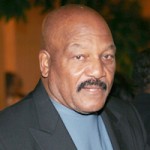 James Nathaniel Brown was born in St. Simons, Georgia, USA. He is a former professional American football player and actor. He was a fullback for the Cleveland Browns of the National Football League from 1957 to 1965. In his professional career, he carried the ball 2,359 times for 12,312 rushing yards and 106 touchdowns, which were all records when he retired. He was named to the NFL 75th Anniversary All-Time Team, comprising the best players in NFL history. He was enshrined in the Pro Football Hall of Fame in 1971. He was inducted into the College Football Hall of Fame in 1995. His role in several films include: Rio Conchos, The Dirty Dozen, Dark of the Sun, The Split, The Grasshopper, Slaughter, The Slams, Take a Hard Ride, The Running Man, Original Gangstas, and She Hate Me.