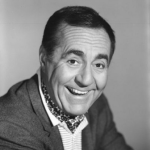 James Gilmore Backus was born in Cleveland, Ohio, USA. He was an American actor. Among his most famous roles were the voice of nearsighted cartoon character Mr. Magoo, the rich Hubert Updike III on the radio version of The Alan Young Show, and Thurston Howell III, on the 1960s sitcom Gilligan's Island. He also starred in his own show of one season, The Jim Backus Show, also known as Hot Off the Wire. His role in several films include: One Last Fling, Easy Living, Emergency Wedding, Bright Victory, Half Angel, Iron Man, Pat and Mike, I Love Melvin, Francis in the Navy, The Great Man, Top Secret Affair, Ask Any Girl, 1001 Arabian Nights (voice), Ice Palace, My Six Loves, Sunday in New York, Fluffy, Hurry Sundown, Crazy Mama, The Magic Pony (voice), Enchanted Journey (voice), Slapstick of Another Kind, and Prince Jack. His role in television include: Mister Magoo's Christmas Carol (voice), Wake Me When the War Is Over (TV film), The Brady Bunch (Sitcom), and Rescue from Gilligan's Island (TV film).