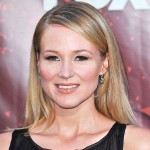 Jewel Kilcher was born in Payson, Utah, USA. She is an American singer-songwriter, guitarist, music producer, actress, author and poet. She has received four Grammy Award nominations and, as of 2008, has sold over 30 million albums worldwide. Her albums list shown below: Pieces of You (singles: "Who Will Save Your Soul", "You Were Meant for Me", and "Foolish Games"), Spirit (singles: "Hands", "Down So Long", and "Jupiter"), Joy, This Way (singles: "Standing Still", "Break Me", "This Way", and "Serve the Ego"), 0304 (singles: "Intuition", "Stand", and "2 Become 1"), Goodbye Alice in Wonderland (singles: "Again and Again", and "Good Day"), Perfectly Clear (singles: "Stronger Woman", and "I Do"), Lullaby, Sweet and Wild (singles: "Stay Here Forever", "Satisfied", and "Ten"), The Merry Goes 'Round, Let It Snow, and Picking Up the Pieces (singles: "My Father's Daughter"). Her role in several films include: Ride with the Devil, and Walk Hard: The Dewey Cox Story. Her role in television include: The Lyon's Den (TV series), Ring of Fire (TV film), and Concrete Evidence: A Fixer Upper Mystery (TV film). She has written several books include: A Night Without Armor (poetry), Chasing Down the Dawn (autobiography), and Never Broken: Songs Are Only Half the Story (memoir).