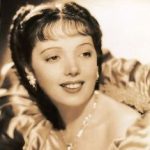 Jessie Matthews was born in London, England. She was an English actress, dancer and singer. She took dancing lessons as a child in a room above the local public house at 22 Berwick Street. She was acclaimed in the United Kingdom as a dancer and as the first performer of numerous popular songs of the 1920s and 1930s, including "A Room with a View" by Noël Coward and "Let's Do It, Let's Fall in Love" by Cole Porter. Her role in several films include: The Beloved Vagabond, Out of the Blue, The Midshipmaid, The Good Companions, Waltzes from Vienna, Evergreen, It's Love Again, Gangway, Climbing High, Forever and a Day, Candles at Nine, Tom Thumb, and The Hound of the Baskervilles. She is the author of book, entitled Over My Shoulder (Autobiography).