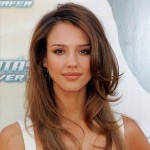 Jessica Marie Alba was born in Pomona, California, USA. She is an American actress and businesswoman. In 2012, she co-founded The Honest Company, a consumer goods company that sells non-toxic household products. Her role in several films include: Camp Nowhere, Never Been Kissed, Paranoid, Honey, Sin City, Fantastic Four, Into the Blue, The Ten, Good Luck Chuck, Awake, The Love Guru, Valentine's Day, An Invisible Sign, Dear Eleanor, Some Kind of Beautiful, Barely Lethal, and The Veil. Her role in television include: Flipper (TV series), Dark Angel (TV series, Nominated- Golden Globe Award for Best Performance by an Actress in a TV-Series- Drama), The Spoils of Babylon (comedy miniseries), and Planet of the Apps (reality television show).