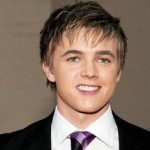 Jesse McCartney was born in Ardsley, Westchester, New York, USA. He is an American actor, singer, songwriter and Voice Artist. His role in several films include: The Pirates of Central Park, Pizza, Keith, Beware the Gonzo, Chernobyl Diaries, and 88. His role in several films (only voice) include: Alvin and the Chipmunks, Horton Hears a Who!, The Clockwork Girl, and The Pirate Fairy. His role in television include: All My Children (TV drama, Won- Young Artist Award for Best Performance in a Daytime Series by a Young Actor), Summerland (TV series), Young Justice (TV series, only voice), Army Wives (TV series), Expecting Amish (TV film), and Young & Hungry (TV series). His albums list shown below: Beautiful Soul, Up Close, Right Where You Want Me, Departure, Have It All, and Technicolor. His singles list shown below: "Beautiful Soul", "She's No You", "Get Your Shine On", "Because You Live", "Right Where You Want Me", "It's Over", "Leavin'", and "Just So You Know".