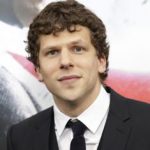 Jesse Adam Eisenberg was born in Queens, New York City, New York, USA. He is an American actor, author and playwright. He studied at The New School in Greenwich Village. His role in several films include: Roger Dodger, The Emperor's Club, The Village, The Squid and the Whale, The Education of Charlie Banks, Adventureland, Zombieland, The Social Network (Nominations- BAFTA, Golden Globe, and Academy Award for best actor), Holy Rollers, 30 Minutes or Less, To Rome with Love, Café Society, Now You See Me, Now You See Me 2, American Ultra, and Batman v Superman: Dawn of Justice. His role in television include: Get Real (TV series) and Lightning: Fire from the Sky (TV film). He has written and starred in three plays for the New York stage: Asuncion, The Revisionist, and The Spoils. He is the author of book, entitled Bream Gives Me Hiccups: and Other Stories.