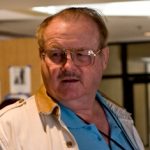 Jerry Eugene Pournelle was born in Shreveport, Louisiana, USA. He is an American science fiction writer of many novels and journalist who contributed for many years to the computer magazine Byte. He wrote the "Chaos Manor" column in BYTE. He served as President of the Science Fiction and Fantasy Writers of America in 1973. He served in the U.S. Army during the Korean War. He studied at the University of Washington and earned a BS degree in psychology and Mathematics in 1955, an MS degree in Experimental Statistics and Systems Engineering in 1958, and a PhD in political science in 1964. He has written several novels (with Larry Niven) include: The Mote in God's Eye, Inferno, Lucifer's Hammer, Oath of Fealty, Footfall, The Gripping Hand, The Burning City, Burning Tower, and Escape from Hell. He has written other novels include: King David's Spaceship, Birth of Fire, Exiles to Glory, Janissaries, Starswarm, Janissaries II (with Roland J. Green), The Legacy of Heorot (with Larry Niven and Steven Barnes), Janissaries III (with Roland J. Green), Fallen Angels (with Larry Niven and Michael F. Flynn), Beowulf's Children (with Larry Niven and Steven Barnes), and Higher Education (with Charles Sheffield).