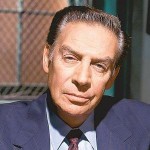 Jerome Bernard "Jerry" Orbach was born in The Bronx, New York City, New York, USA. He was an American actor. He was studied at the University of Illinois at Urbana-Champaign, and Northwestern University. His professional career began on the New York stage. His role on stage, including The Fantasticks, Guys and Dolls, Promises, Promises (Won- Drama Desk Award for Outstanding Actor in a Musical, Tony Award for Best Actor in a Musical), Chicago, and 42nd Street. His role in several films include: A Fan's Notes, Fore Play, Prince of the City, Brewster's Millions, Dirty Dancing, I Love N.Y., Out for Justice, Universal Soldier, Chinese Coffee, and Manna from Heaven. His role in television include: An Invasion of Privacy (TV film), The Law & Harry McGraw (TV series), Law & Order ( legal drama, Won- Screen Actors Guild Award for Outstanding Performance by a Male Actor in a Drama Series, Nominated- Primetime Emmy Award for Outstanding Lead Actor in a Drama Series, Screen Actors Guild Award for Outstanding Performance by an Ensemble in a Drama Series), and Exiled: A Law & Order Movie (TV film).