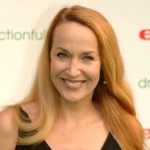 Jerry Faye Hall was born in Gonzales, Texas, USA. She is an American model and actress. She graduated from North Mesquite High School. She left home at 21 to become a model. She also attended the Kim Dawson Modeling Agency. By 1977, she had been on 40 magazine covers including Italian Vogue and Cosmopolitan. She also modeled for artists Francesco Clemente, Ed Ruscha and Lucian Freud. Her role in several films include: Willie & Phil, Batman, Roger Waters: The Wall: Live in Berlin, Bejewelled (TV film), RPM, Merci Docteur Rey, Tooth, The All Star Impressions Show (TV film), Absolutely Fabulous, and Forgotten Man. In 1977, she started dating Mick Jagger. She and Jagger married in 1990 and later divorced. They have four children. In January 2016, she became engaged to 84-year-old media mogul Rupert Murdoch. The couple married on March 4, 2016.