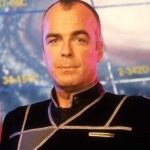 Jerry Doyle was born in Brooklyn, New York City, New York, USA. He was an American actor, radio personality, politician, and founder of the content platform EpicTimes. He earned a BS degree in Aeronautics from Embry-Riddle Aeronautical University in 1978. His role in several films include: Code Hunter, Devious Beings, Lost Treasure, The Long Ride Home, and Open House. His role in television include: Moonlighting (TV series), Babylon 5 (TV series), and Captain Simian & the Space Monkeys (animated TV series, only voice). His nationally syndicated talk show, The Jerry Doyle Show, aired throughout the United States on Talk Radio Network. Previously a corporate jet pilot and after a decade as a stockbroker on Wall Street, he made an abrupt career change into acting in 1991. He ran as the Republican Party candidate for a seat in the U.S. House of Representatives in 2000.