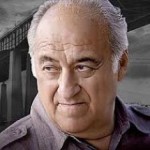 Jerry Adler was born in Brooklyn, New York City, New York, USA. He is an American theatre director, theatre producer and actor. He began his theatre career as a stage manager in 1951, working on such productions as Of Thee I Sing and My Fair Lady before becoming a production supervisor for The Apple Tree, Black Comedy/White Lies, Dear World, Coco, 6 Rms Riv Vu, Annie, and I Remember Mama, among others. He directed the 1976 revival of My Fair Lady, which garnered him a Drama Desk Award nomination, and the ill-fated 1981 musical The Little Prince and the Aviator. He also directed the 1976 play Checking Out. His role in several films include: The Public Eye, For Better or Worse, Six Ways to Sunday, 30 Days, Prime, Find Me Guilty, The Angriest Man in Brooklyn, and A Most Violent Year. His role in television include: Mad About You (TV series), The Odd Couple: Together Again (TV film), Hudson Street (TV series), Alright Already (TV series), The Sopranos (TV series), Raising Dad (TV series), Rescue Me (TV series), The Good Wife (TV series), and Remember Sunday (TV film).