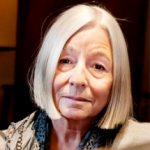 Jenny Diski was born in London, England. She was an English author and novelist. She was educated at University College London. She worked as a teacher during the 1970s and early 1980s. She was a regular contributor to The Observer and the London Review of Books. She wrote several novels include: Nothing Natural, Rainforest, Like Mother, Then Again, Happily Ever After, Monkey's Uncle, The Dream Mistress, After These Things, Only Human, and Apology for the Woman Writing. She wrote short stories, entitled The Vanishing Princess. She wrote Non-fiction works include: Skating to Antarctica (autobiography), Don't (essays), Stranger on a Train (J. R. Ackerley Prize for Autobiography, and Thomas Cook Travel Book Award), A View from the Bed (essays), On Trying to Keep Still, The Sixties (memoir), What I Don’t Know About Animals, and In Gratitude (memoir).