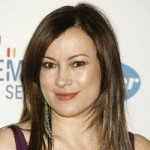 Jennifer Tilly was born in Harbor City, Los Angeles, California, USA. She is an American actress and poker player. She is a World Series of Poker Ladies' Event bracelet winner. She is the older sister of actress Meg Tilly. She earned a BA degree in Theater from Stephens College in Missouri. Her role in several films include: No Small Affair, Inside Out, Johnny Be Good, High Spirits, The Fabulous Baker Boys, Bullets over Broadway (Nominated- Academy Award for Best Supporting Actress), The Getaway, Man with a Gun, The Pompatus of Love, American Strays, Liar Liar, Bride of Chucky, Do Not Disturb, Cord, The Crew, The Haunted Mansion, Tideland, Deal, Inconceivable, Empire of Silver, and 30 Beats. Her role in television include: Hill Street Blues (TV serial), Key West (TV series), Heads (TV film), Sister Mary Explains It All (TV film), Out of Practice (Sitcom), and The Initiation of Sarah (TV film).