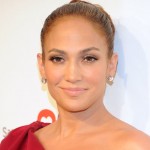 Jennifer Lynn Lopez, also known by her nickname J.Lo was born in Castle Hill, The Bronx, New York City, New York, USA. She is an American singer, actress, businesswoman, dancer, fashion designer and producer. She gained her first high-profile job as a Fly Girl dancer on In Living Color in 1991, where she remained a regular until she decided to pursue an acting career in 1993. Her albums list shown below: On the 6, J.Lo, This Is Me... Then, Rebirth, Como Ama una Mujer, Brave, Love?, and A.K.A.. Her singles list shown below: "If You Had My Love", "Waiting for Tonight", "Love Don't Cost a Thing", "Play", "I'm Glad", "Baby I Love U!", "Get Right", "I Need You", "Do It Well", "On the Floor", "Papi", and "First Love". Her role in several films include: My Little Girl, Money Train, Selena, Anaconda, Antz, Angel Eyes, Jersey Girl, Monster-in-Law, Bordertown (also producer), El Cantante (also producer), Parker, The Boy Next Door (also producer), and Lila & Eve. Her role in television include: In Living Color (Comedy TV series), Second Chances (TV series), Hotel Malibu (TV series), American Idol (singing competition- Judge), Shades of Blue (TV series), and World of Dance (reality competition series- Judge, also executive producer). She has received a landmark star on the Hollywood Walk of Fame and the Billboard Icon Award, among other honors.