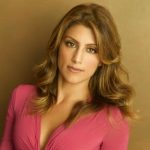 Jennifer Esposito was born in New York City, New York, USA. She is an American actress. She is most known for her appearances in the feature films Crash (Won- Screen Actors Guild Award for Outstanding Performance by a Cast in a Motion Picture, Satellite Award for Best Cast- Motion Picture), Summer of Sam, Don't Say a Word, and Welcome to Collinwood. She is known for roles in several television series including, Spin City, Related, Samantha Who?, Blue Bloods, and Mistresses among others. Her role in other films include: He Got Game, Side Streets, The Bachelor, Conspiracy, and Bending the Rules. In 2015, she became the brand ambassador for Eclair Naturals, a gluten-free, GMO-free, and vegan body and skin care line available in Rite Aid stores across the United States. she has written several books include: Jennifer's Way, and Jennifer's Way Kitchen.