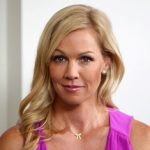 Jennifer Eve "Jennie" Garth was born in Urbana, Illinois, USA. She is an American TV actress and dancer. Her role in several films include: Power 98, and My Brother's War. In 2007, she appeared on season five of Dancing with the Stars and was paired with Derek Hough. They reached the semi-finals in the competition. Her role in television include: Brand New Life (TV series), Beverly Hills, 90210 (TV series, Won- Young Artist Awards for Best Young Actress Co-starring in a Television Series in 1992), Star (TV movie), Without Consent (TV film), An Unfinished Affair (TV film), What I Like About You (TV series), Girl, Positive (TV movie, Won- Prism Awards for Outstanding Performance in a Miniseries in 2008), Accidentally in Love (TV movie), Village People (TV movie), Holidaze (TV movie), and Mystery Girls (TV series).