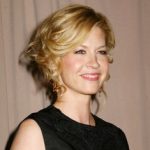 Jennifer Mary Elfman was born in Los Angeles, California, USA. She is an American actress. She studied at California State University, Northridge. Her role in several films include: Grosse Pointe Blank, EDtv, Keeping the Faith (Nominated- Satellite Award for Best Actress- Motion Picture Musical or Comedy), Town & Country, The Six Wives of Henry Lefay, Love Hurts, Friends with Benefits, Big Stone Gap, and Barry. Her role in several television series include: Townies, Dharma & Greg (Won- Golden Globe Award for Best Actress- 1999. Nominated- Primetime Emmy Award for Outstanding Lead Actress in a Comedy Series, Golden Globe Award for Best Actress- 1998, 2000), Courting Alex, Accidentally on Purpose, 1600 Penn, Growing Up Fisher, and Imaginary Mary. She is a member of the Church of Scientology. She is on the Board of Directors of the Dizzy Feet Foundation. She married to Bodhi Elfman. They have two sons.