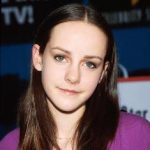 Jena Malone was born in Sparks, Nevada, USA. She is an American actress and producer. She is also an indie pop musician who has released music both under her own name and as one-half of the duo The Shoe. Her role in several films include: Contact (Won- Saturn Awards for Best Performance by a Younger Actor), Stepmom, For Love of the Game, Life as a House, American Girl (also producer), Corn, Howl's Moving Castle, Lying, Into the Wild, The Soloist, The Wait, The Hunger Games film series (2013–15), Inherent Vice, Angelica, The Neon Demon, Lovesong, and Bottom of the World. Her role in television include: Hidden in America (TV film), Bastard out of Carolina (TV film, Won- Young Artist Awards for Best Performance in a TV Movie- Leading Young Actress), Hope (TV film, Nominated- Golden Globe Awards for Best Actress in a Miniseries or Television Film), Cheaters, Hitler: The Rise of Evil (miniseries), and Hatfields & McCoys (miniseries).