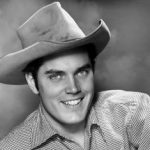 Jeffrey Hunter was born in New Orleans, Louisiana, USA. He was an American actor and producer known for his roles in classic films such as The Searchers and King of Kings. He graduated from Northwestern University in 1949. He studied at the University of California at Los Angeles to get his master's degree in radio. His role in other films include: Fourteen Hours, Red Skies of Montana, Sailor of the King, Three Young Texans, White Feather, The Living Swamp (documentary film, also producer), Seven Cities of Gold, A Kiss Before Dying, Count Five and Die, In Love and War, Sergeant Rutledge, The Longest Day, Brainstorm, Custer of the West, Find a Place to Die, and Cry Chicago. His role in television include: Temple Houston (TV series, also executive producer), and Star Trek (TV series).