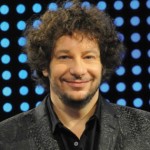 Jeffrey Ross Lifschultz, known professionally as Jeff Ross was born in Springfield, New Jersey, USA. He is an American stand-up comedian, actor, director and screenwriter. His skill in doing high-profile celebrity roasts and his appearances in Comedy Central's Roasts, have led him to be dubbed "The Roastmaster General." He graduated from Boston University College of Communication. His role in several films include: The Wedding Ringer, Flock of Dudes, One, Two, Many, The Aristocrats (documentary film), American Dreamz, A Novel Romance, The Last Laugh, Encino Woman, and Born in Brooklyn. He has written several films include: Patriot Act (documentary film, also director), The Comedian, and The Lost & Found Family. His albums list shown below: Immunity, Thunderstorm, and Only Your Voice. He is the author of book, entitled I Only Roast the Ones I Love. His role in television include: Jeff Ross Roasts Criminals (TV movie) and The Burn with Jeff Ross (comedy panel show, also host and executive producer).