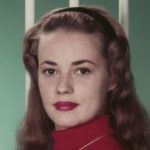 Jeanne Moreau was born in Paris, France. She is a French actress, screenwriter and film director. She studied at the Conservatoire de Paris. Her role in several films include: The Man in My Life, Julietta, Touchez pas au grisbi, Elevator to the Gallows, Moderato cantabile (Won- Cannes Film Festival Award for Best Actress), A Woman Is a Woman, Jules and Jim, Diary of a Chambermaid, Viva Maria! (Won- BAFTA Award for Best Foreign Actress), The Last Tycoon, Querelle, Nikita, The Old Lady Who Walked in the Sea (Won- César Award for Best Actress), Beyond the Clouds, The Proprietor, Witch Way Love, Time to Leave, Romeo and Juliet, Disengagement, Face, and Gebo and the Shadow. She directed several films include: Lumière, and L'Adolescente(also screenwriter).