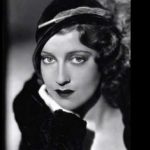 Jeanette Anna MacDonald was born in Philadelphia, Pennsylvania, USA. She was an American actress and singer. She later appeared in opera, concerts, radio, and television. Her role in several films include: The Love Parade, The Vagabond King, Monte Carlo, The Lottery Bride, One Hour with You, Love Me Tonight, The Merry Widow, Naughty Marietta, Rose Marie, San Francisco, Maytime, The Girl of the Golden West, Sweethearts, New Moon, Bitter Sweet, Cairo, Three Daring Daughters, and The Sun Comes Up.