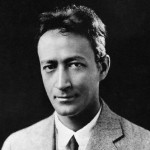 Jean Toomer was born in Washington, D.C., USA. He was an American poet, novelist and an important figure of the Harlem Renaissance and modernism. He studied at the University of Wisconsin-Madison, the Massachusetts College of Agriculture, the American College of Physical Training in Chicago, the University of Chicago, New York University, and the City College of New York studying agriculture, fitness, biology, sociology, and history, but he never completed a degree. He wrote several books include: Cane(novel), Essentials, An interpretation of Friends worship, The Flavor of Man, The Collected Poems of Jean Toomer, Brother Mine(with Waldo Frank), The Wayward and the Seeking, and A Drama of the Southwest.