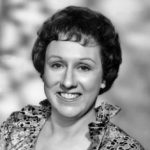 Jean Stapleton was born in Manhattan, New York City, New York, USA. She was an American character actress. She is best known for having portrayed Edith Bunker, the long-suffering, yet devoted wife of Archie Bunker, on the 1970s sitcom All in the Family. She was a three-time recipient of the Prime Time Emmy Award for leading actress in a comedy series and won two Golden Globes in the same category during the show's airing. Her role in several films include: Damn Yankees, Bells Are Ringing, Something Wild, Up the Down Staircase, Klute, Cold Turkey, The Buddy System, Bury Me in Niagara, Michael, You've Got Mail, and Pursuit of Happiness. Her role in television include: Archie Bunker's Place (TV series), Eleanor, First Lady of the World (TV film), A Matter of Sex (TV film), Dead Man's Folly (TV film), Faerie Tale Theatre (TV series), Mother Goose Rock 'n' Rhyme (TV film), Fire in the Dark (TV film), The Habitation of Dragons (TV film), Baby (TV film), and Bagdad Cafe (TV series).