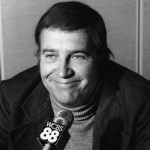 Jean Parker Shepherd, Jr. was born in Chicago, Illinois, USA. He was an American radio personality and writer who was often referred to by the nickname Shep. He attended Indiana University, but never graduated. During World War II, he served stateside in the U.S. Army Signal Corps. After his military service, he began his broadcast radio career in early 1945 on WJOB (AM) in Hammond, Indiana, later working at WTOD in Toledo, Ohio, in 1946. Next, he worked at KYW in Philadelphia, PA between 1951 and 1953, before finding his dream job at WOR in New York City in 1956. At WOR, he worked the night shift, reading stories and poetry, and enacting comic exploits. He wrote several films include: A Christmas Story, Ollie Hopnoodle's Haven of Bliss (TV film), and My Summer Story. He wrote several books include: In God We Trust (novel), Wanda Hickey's Night of Golden Memories, The Ferrari in the bedroom, The Phantom of the Open Hearth, A fistful of fig newtons, and A Christmas Story. He was inducted into the Radio Hall of Fame in 2005.