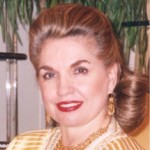 Jean P. Sasson was born in Troy, Alabama, USA. She is an American author whose work mainly centers around women in the Middle East. In 1978, she traveled to Saudi Arabia to work in the King Faisal Specialist Hospital in Riyadh as an administrative coordinator of medical affairs, where she met Peter Sasson, her future husband. They married in 1982 and Sasson left the hospital after four years of service, but the couple remained in Saudi Arabia until 1990. She has written several books include: The Rape of Kuwait, Daughters of Arabia, The Complete Princess Trilogy, Princess Sultana's Daughters, Desert Royal, Princess Sultana's Circle, Ester's Child (novel), Mayada: Daughter of Iraq, Love in a Torn Land, For the Love of a Son, American Chick in Saudi Arabia, Princess: Secrets to Share, and Princess, More Tears to Cry.