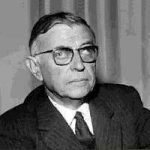 Jean-Paul Charles Aymard Sartre was born in Paris, France. He was a French philosopher, playwright, novelist, screenwriter and literary critic. He earned a BA degree in philosophy from Ecole Normale Superieure in 1930. He was one of the key figures in the philosophy of existentialism and phenomenology, and one of the leading figures in 20th-century French philosophy and Marxism. He was awarded the Nobel Prize for Literature in 1964, but he declined it. He wrote several novels include: Nausea, The Age of Reason, The Reprieve, and Troubled Sleep. He wrote several plays include: The Flies, No Exit, The Respectful Prostitute, The Chips Are Down, Dirty Hands, The Devil and the Good Lord, and The Condemned of Altona. He wrote several films include: The Chips are Down, The Respectful Prostitute, The Proud and the Beautiful, The Crucible, The Condemned of Altona, and The Wall.