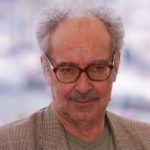 Jean-Luc Godard was born in Paris, France. He is a French film director, screenwriter and film critic. He is often identified with the 1960s French film movement La Nouvelle Vague, or "New Wave". He registered for a certificate in anthropology at the University of Paris, but did not attend class. He directed and has written several films include: Breathless, A Woman Is a Woman, A Married Woman, Alphaville, Made in U.S.A.,Weekend, Number Two, Passion, Hail Mary, Détective, New Wave, For Ever Mozart, In Praise of Love, and Goodbye to Language. In 2010, he was awarded an Academy Honorary Award. He received Prix Jean Vigo award and Honorary César award (1987, 1998).