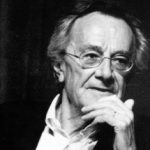 Jean Francois Lyotard was born in Versailles, France. He was a French philosopher. He is best known for his articulation of postmodernism after the late 1970s and the analysis of the impact of postmodernity on the human condition. He was co-founder of the International College of Philosophy with Jacques Derrida, François Châtelet, and Gilles Deleuze. He studied philosophy at the Sorbonne in the late 1940s. In 1971, he earned a State doctorate with his dissertation Discours, figure under Mikel Dufrenne- the work was published the same year. He taught at the Lycée of Constantine, Algeria from 1950 to 1952. He served as a professor of Philosophy at the University of Paris, VIII. He served as a professor of Critical Theory at the University of California at Irvine, and professor of French and Philosophy at Emory University. He wrote several books include: Discourse, Figure, Libidinal Economy, The Postmodern Condition, The Differend: Phrases in Dispute, Phenomenology, Pacific Wall, The inhuman, The hyphen, Toward the postmodern, The Lyotard reader, The confession of Augustine, Why Philosophize?, and Enthusiasm.