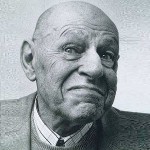 Jean Philippe Arthur Dubuffet was born in Le Havre, France. He was a French painter and sculptor. He is perhaps best known for founding the art movement Art Brut, and for the collection of works- Collection de l'art brut- that this movement spawned. He enjoyed a prolific art career, both in France and in America, and was featured in many exhibitions throughout his lifetime. He moved to Paris in 1918 to study painting at the Académie Julian, becoming close friends with the artists Juan Gris, André Masson, and Fernand Léger. He took up painting again in 1934 when he made a large series of portraits in which he emphasized the vogues in art history. But again he stopped, developing his wine business at Bercy during the German Occupation of France. His Exhibitions list shown below: Galerie Rene Drouin, Paris (1944), Pierre Matisse Gallery, New York 29 works (1951), Institute of Contemporary Arts, London 56 works (1955), Arthur Tooth and Sons, London 31 works (1958), Kestner-Gesellschaft, Hanover 88 works (1960), Museum of Modern Art, New York 85 works (1962), Galleria Marlborough, Rome 68 works (1963), Gimpel Hanover Galerie, Zurich 34 works (1965), and Robert Fraser Gallery, London 13 works (1966).