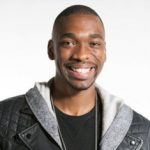 Jared Antonio Farrow, better known by his stage name Jay Pharoah was born in Chesapeake, Virginia, USA. He is an American actor, stand-up comedian and impressionist. He joined the cast of NBC's Saturday Night Live in 2010, for its thirty-sixth season. In 2015, he was ranked the 55th greatest Saturday Night Live cast member by Rolling Stone magazine. He studied at Tidewater Community College and Virginia Commonwealth University. His role in several films include: Lola Versus, Ride Along, Balls Out, Top Five, and Get a Job. He known for his many celebrity impressions, including Barack Obama, Will Smith, Jay-Z, 50 Cent, Eddie Murphy, Charlie Murphy, Chris Rock, Kanye West, Stephen A. Smith and Denzel Washington.