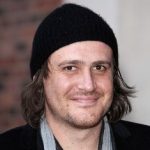 Jason Jordan Segel was born in Los Angeles, California, USA. He is an American actor, screenwriter and author, best known for his role as Marshall Eriksen in the CBS sitcom How I Met Your Mother. His role in several films include: Can't Hardly Wait, Slackers, LolliLove, Forgetting Sarah Marshall(also writer), Bad Teacher, The Muppets(also writer), The Five-Year Engagement(also writer), This Is 40, Sex Tape(also writer), and The Discovery. His role in television include: Freaks and Geeks(TV series) and Undeclared(Sitcom). He has written several books(with Kirsten Miller) include:  Nightmares!, Nightmares! The Sleepwalker Tonic(novel), Nightmares! The Lost Lullabye, The Lost Lullaby, and Otherworld.