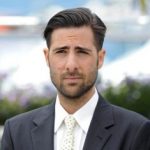 Jason Francesco Schwartzman was born in Los Angeles, California, USA. He is an American actor, screenwriter and musician. He is known for his frequent collaborations with Wes Anderson, such as Rushmore, The Darjeeling Limited(also writer), Fantastic Mr. Fox, Moonrise Kingdom, and The Grand Budapest Hotel. His role in other films include: Slackers, Spun, I Heart Huckabees, Shopgirl, Funny People, Big Eyes, The Overnight, 7 Chinese Brothers, Dreamland, and Golden Exits. His role in television include: Cracking Up(TV series), Bored to Death(comedy series), Mozart in the Jungle(TV series, 8 episodes; also writer and producer), and Wet Hot American Summer(TV series). Prior to acting, he was the drummer and a songwriter for the band Phantom Planet. In 2007, he created the indie rock solo act Coconut Records. His albums list shown below: Nighttiming and Davy. He performed the musical score for Funny People and the theme song for Bored to Death. He also played the drums on Phoenix's rendition of The Beach Boys' song "Alone on Christmas Day" in 2015.