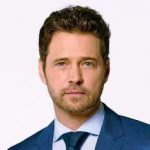 Jason Bradford Priestley was born in Vancouver, British Columbia, Canada. He is a Canadian actor and director. He is best known as the virtuous Brandon Walsh on the television series Beverly Hills, 90210 and for his role starring as Richard "Fitz" Fitzpatrick in the show Call Me Fitz. His role in several films include: The Boy Who Could Fly, Calendar Girl, Coldblooded, Love and Death on Long Island, Eye of the Beholder, The Fourth Angel, Cherish, Time of the Wolf, Die, Mommie, Die!, Going the Distance, Hot Tamale, and Zoom. His role in television include: Teen Angel(TV series), Sister Kate(TV series), I Want to Marry Ryan Banks(TV film), Tru Calling(TV series), Colditz(miniseries), Love Monkey(TV series), Above and Beyond(miniseries), Side Order of Life(TV series), Expecting a Miracle(TV movie), and Private Eyes(TV series). He directed several films include: Barenaked in America(documentary film), Kiss Tomorrow Goodbye(TV movie), and Goodnight for Justice(TV movie).