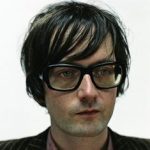 Jarvis Branson Cocker was born in Sheffield, Yorkshire, England. He is an English musician, singer-songwriter, actor, radio presenter and music video director. He initially found success as the frontman of the band Pulp, becoming a figurehead of the Britpop genre of the mid-1990s. Following Pulp's hiatus, he has led a successful solo career, and presents a BBC Radio 6 Music show called Jarvis Cocker's Sunday Service. His albums list shown below: Jarvis, Further Complications, and Room 29(with Chilly Gonzales). His songs list shown below: "Don’t Let Him Waste Your Time", "Fat Children", "Big Julie", "Baby's Coming Back to Me", "I Never Said I Was Deep", and "Angela". His role in several films include: Fantastic Mr. Fox(voice), The Good Night, Leonard Cohen: I'm Your Man, and Live Forever(documentary film).