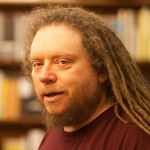 Jaron Zepel Lanier was born in New York City, New York, USA. He is an American computer scientist, visual artist, author and composer of classical music. He studied at New Mexico State University. In the late 1990s, he worked on applications for Internet2. He was also visiting scholar with the Department of Computer Science at Columbia University from 1997–2001. From 2001 to 2004, he was Visiting Scientist at Silicon Graphics Inc., where he developed solutions to core problems in telepresence and tele-immersion. From 2006 he began to work at Microsoft, and from 2009 forward he works at Microsoft Research as Interdisciplinary Scientist. He Released his album, Lanier: Instruments of Change in 1994. He was the director of an experimental short film, Muzork, and teamed with Mario Grigorov to compose the soundtrack to the documentary film, The Third Wave. He has written several books include: You Are Not A Gadget, Who Owns the Future?, Information Is An Alienated Experience, Dawn of the New Everything, and Fate of Power the Air Exp.