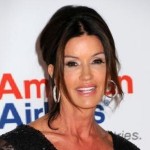 Janice Doreen Dickinson was born in Brooklyn, New York City, New York, USA. She is an American model, photographer and author. One of the most successful models of the 1970s and 1980s, she also served as a judge on four cycles on America's Next Top Model beginning in 2003. She opened a modeling agency in 2005, which was documented in the reality television series The Janice Dickinson Modeling Agency from 2006–08. She appeared within and on covers of magazines including Harper's Bazaar, Cosmopolitan, Photo, Vogue, Marie Claire, and Playboy, and worked with some of fashion's best-known names, including Bill Blass, Gianni Versace, Valentino Garavani, Azzedine Alaïa, Pino Lancetti, Halston, Oscar de la Renta and Calvin Klein. She has appeared on the cover of Vogue 37 times. She has written several books(memoirs) include: No Lifeguard on Duty, Everything About Me is Fake… And I’m Perfect, and Check Please! Dating, Mating, and Extricating.