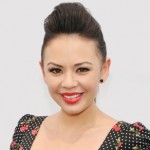 Janel Meilani Parrish was born in Oahu, Hawaii, USA. She is an American actress, dancer, singer and songwriter. She is best known for playing Mona Vanderwaal on the Freeform series Pretty Little Liars. She is also known for the role of Jade in the 2007 film Bratz. In 2014, she participated in the 19th season of Dancing with the Stars, taking third place. She studied at the Moanalua Elementary and Middle Schools. Her role in several films include: Fired Up!, April Showers, One Kine Day, 4 Wedding Planners, Celeste and Jesse Forever, and The Concerto. Her role in television include: Geppetto(TV film) and High School Possession(TV film). At the age of six, she entered and won a statewide singing contest. In 2007, she was signed to Geffen Records to produce her first album. Her first single, "Rainy Day", one that she has written, along with its music video, was released on July 7, 2007, and was also featured on the Bratz Motion Picture Soundtrack.