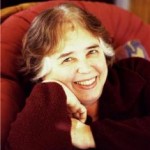 Jane Hyatt Yolen was born in New York City, New York, USA. She is an American writer of fantasy, science fiction and children's books. She is the author or editor of more than 280 books. She studied at Smith College, Northampton, Massachusetts. In 1962, she married David W. Stemple. They had three children. She has written several novels include: Cards of Grief(Mythopoeic Fantasy Award), The Devil's Arithmetic, Sister Light, Sister Dark, Wizard's Hall, Briar Rose, The One-Armed Queen, Armageddon Summer(with Bruce Coville), Sword of the rightful king, and Centaur Rising. She has written several children's books include: The Emperor and the Kite(Won- Caldecott Medal), Owl Moon, How Do Dinosaurs Say Good Night?, How Do Dinosaurs Say I Love You?, The young Merlin trilogy(Won- Mythopoeic Fantasy Award for Children's Literature). Although she considered herself a poet, journalist and nonfiction writer. Her accolades include the Caldecott Medal, two Nebula Awards, the World Fantasy Award, three Mythopoeic Awards, the Kerlan Award, and two Christopher Awards.