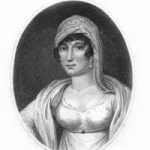 Jane Taylor was born in London, England. She was an English poet. She wrote the words to the song "Twinkle, Twinkle, Little Star". The poem is now known worldwide, but its authorship is generally forgotten. It was first published under the title "The Star" in Rhymes for the Nursery, a collection of poems by Taylor and her older sister Ann. She wrote other poems include: Original poems, for infant minds(with Ann Taylor), Rhymes for the Nursery(with Ann Taylor), Little Ann, and other poems(with Ann Taylor), The Violet, The Orphan, The Spider, The Good-Natured Girls, Mischief, The Disappointment, and The Apple-Tree.