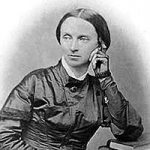 Jane Grey Cannon Swisshelm was born in Pittsburgh, Pennsylvania, USA. She was an American newspaper editor, journalist, abolitionist, publisher, writer, teacher, women's rights advocate, feminist and Civil War nurse. She was a schoolteacher at age 14. Swisshelm, already an experienced journalist and editor of the Pittsburgh Saturday Visiter, argued for women's rights and the abolishment of slavery. To escape a troubled marriage and money problems, Swisshelm, along with her young daughter, moved to St. Cloud, Minnesota, to be near family. Soon after their arrival she became editor of the St. Cloud Visiter and later created a new paper known as the St. Cloud Democrat. Her strong political opinions expressed in her papers, helped the early Republican Party dominate Minnesota politics. During the Civil War she volunteered as a nurse and then retired to Swissvale, Pennsylvania, where she continued to write. She wrote two books, including Half a Century(autobiography) and Crusader and feminist.