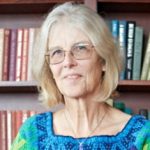 Jane Smiley was born in Los Angeles, California, USA. She is an American novelist and professor. She obtained a BA degree in literature from Vassar College in 1971, an MA degree in 1975, an MFA degree from the University of Iowa in 1976. She received his PhD from the University of Iowa in 1978. From 1981 to 1996 she was a Professor of English at Iowa State University. She has written several novels include: Barn Blind, At Paradise Gate, Duplicate Keys, The Greenlanders, A Thousand Acres(Won- Pulitzer Prize for Fiction in 1992), Moo, The All-True Travels and Adventures of Lidie Newton, Horse Heaven, Good Faith, Ten Days in the Hills, Private Life, Some Luck, and Early Warning. In 2001, she was elected a member of The American Academy of Arts and Letters. She won the PEN USA Lifetime Achievement Award in 2006.