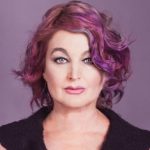 Jane Siberry was born in Toronto, Ontario, Canada. She is a Canadian singer-songwriter, known for such hits as "Mimi on the Beach", "I Muse Aloud", "One More Colour" and "Calling All Angels". She performed the theme song to the television series Maniac Mansion. Her albums list shown below: Jane Siberry, No Borders Here, The Speckless Sky, The Walking, Bound by the Beauty, When I Was a Boy, Maria, Teenager, A Day in the Life, Hush, City, Shushan the Palace, Dragon Dreams, and Angels Bend Closer. In 2005, she was awarded the Victor Martyn Lynch-Staunton Award in music by the Canada Council for the Arts.