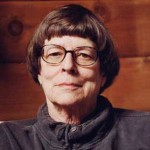 Jane Vance Rule was born in Plainfield, New Jersey, USA. She was an American-born Canadian writer of lesbian-themed novels and non-fiction. She was the oldest daughter of Carlotta Jane and Arthur Richards Rule. She earned a BA degree in English from Mills College, Oakland, California, in 1952. She moved to work at the University of British Columbia in Vancouver, lecturing in English and creative writing from 1959 to 1972. In 1976, she moved to Galiano Island and remained there until the end of her life. In 1989, she donated a collection of her writings to the University of British Columbia. She was inducted into the Order of British Columbia in 1998, and into the Order of Canada in 2007. She wrote several novels include: Desert of the Heart, This Is Not for You, Against the Season, The Young in One Another's Arms, Contract with the World, Memory Board(nominated- Ethel Wilson Fiction Prize), and After the Fire(Nominations- Lambda Literary Award for Lesbian Fiction, Ethel Wilson Fiction Prize). She wrote several short stories include: Theme for Diverse Instruments, Outlander, and Inland Passage and Other Stories. She wrote several essays include: Lesbian Images and A hot-eyed moderate. She has written other book, including Loving The Difficult(Non-fiction, Won- Lambda Literary Award for LGBT Nonfiction).