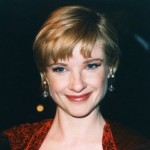 Barbara Jane Horrocks was born in Rawtenstall, Lancashire, England. She is an English actress, voice artist and singer. She was nominated for the 1993 Olivier Award for Best Actress for the title role in The Rise and Fall of Little Voice, and received Golden Globe and BAFTA Award nominations when she reprised the role in the 1998 film Little Voice. She studied at Oldham College and Royal Academy of Dramatic Art. Her role in several films include: The Dressmaker, Getting It Right, The Witches, Life Is Sweet, Faeries(voice), Corpse Bride(voice), Tinker Bell(voice), Sunshine on Leith, Born Romantic, and Absolutely Fabulous. She released her album, The Further Adventures Of Little Voice in 2000. Her songs list shown below: "Hello Dolly", "Dream a Little Dream", "Just in Time", "You're Just in Love", "Crazy", and "Once I Loved".