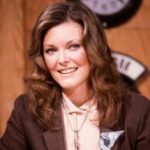 Jane Curtin was born in Cambridge, Massachusetts, USA. She is an American actress and comedian. She was included on a 1986 list of the "Top Prime Time Actors and Actresses of All Time." She holds an associate degree from Elizabeth Seton Junior College in New York City. She married Patrick Francis Lynch, they have one daughter, Tess Curtin Lynch. She has served as a U.S. Committee National Ambassador for UNICEF. Her role in several films include: How to Beat the High Cost of Living, Coneheads, Geraldine's Fortune, Brooklyn Lobster, The Shaggy Dog, and The Heat. Her role in television include: Saturday Night Live(TV show), Divorce Wars: A Love Story(TV film), Kate & Allie(Sitcom, Won- Primetime Emmy Award for Outstanding Lead Actress in a Comedy Series), Working It Out(Sitcom), 3rd Rock from the Sun(Sitcom, Won- Satellite Award for Best Actress- Television Series Musical or Comedy), Our Town(TV film), Crumbs(TV series), and Unforgettable(TV series).